WITH YOUR MULTI-VOICE POETRY

As an example we can use my multi-voice poem: Rhythm of the Tides. But this technique would work for many similar poems.

One of the accompanying pictures has 16 audience participation cards which allow audience members to speak out of sequence with each other. This will allow audiences to participate in the poem. Any size of audience. The 16 cards are printed, duplicated onto coloured card, and cut out. Then placed on every audience member’s seat before the show. Equal number of cards given out for each of the three verses. Cards are numbered 1, 2, and 3. Each depicts the phrases to be spoken by that audience member when the verse that matches the number on their card is being read. eg. Those with card number 2 read out their phrase when the second verse is being performed.


The poem itself was a screen shot posted via a PNG file that had been cropped on Publisher 2010.


The file with the 16 cards on it was too complicated to save and post easily. So, I scanned the complicated printed page (using a high quality scanner) and saved as a high quality PNG file. This worked well and is another useful tool to use to post (to your website) your multi-voice poems or other complicated formats.


This poem has been performed by Chromatic Voices 1. It met with a great reception from the audience. The poem has been printed once in a Book by A.L.L. Times and thanks to them for permission to post the poem here.


If the poem is too difficult to remember then the performers can read their lines off of blank books that are labelled - for the audience to see - with the titles “Wind” etc. With their lines inside. The performers have to move forward line by line at the same time and not leave anyone behind. This is the most difficult part of the poem for the performers on stage. For performers, the more rehearsals you have the better. And this is true for any multi-voice poem!

[This article below is already on one of my websites and duplicates some of the above but is useful to look at.] Large Number Multi-Voice. Since I started writing multi-voice I have been writing different versions that are suitable for large numbers of people: these people being either the audience or the performing Poets taking up the tasks/voices between themselves. I recently devised a version which I think allows maximum variation around the basic idea. Firstly, I wrote a Poem about something that flows or changes (in my case it was the sea, but it could be e.g. time or emotion). There are definite points in the poem were things change by a large amount/in steps. This basic poem has words taken from its text and written up on cards for the audience to read, or for other members of the Performance Group to perform between them. Instructions on how the Poem is meant to be read are enclosed on the card for each member of the audience. The words should have meaning and should fit the various “steps”. In my Poem, the performers read about the sea and each verse has the sea becoming softer and softer. So, the audience have to read words that are very loudly spoken (in verse 1), then loud (verse 2), then normal volume (verse 3). The words themselves change from being harsh words like crash to softer words like lap. Each verse that is read has a number which relates to a number on the card the audience member has: so members of the audience with card 1 read out their bit according to their instructions while the performers are reading verse 1 at the microphone. Similar occurs for verses two and three. Hopefully this relatively simple set up should keep the audience involved and should let them feel part of the poem-in meaning and in sound. This set up might sound a bit complicated but should allow audiences of thirty and upwards to take part in a poem. I was ready to try out this audience participation version of my poem at a poetry night in Glasgow but the audience was only twenty that night and I thought that was too low a number to get the audience participation a proper try out. If your acting/poetry group wants to try this out then please get in touch with me. 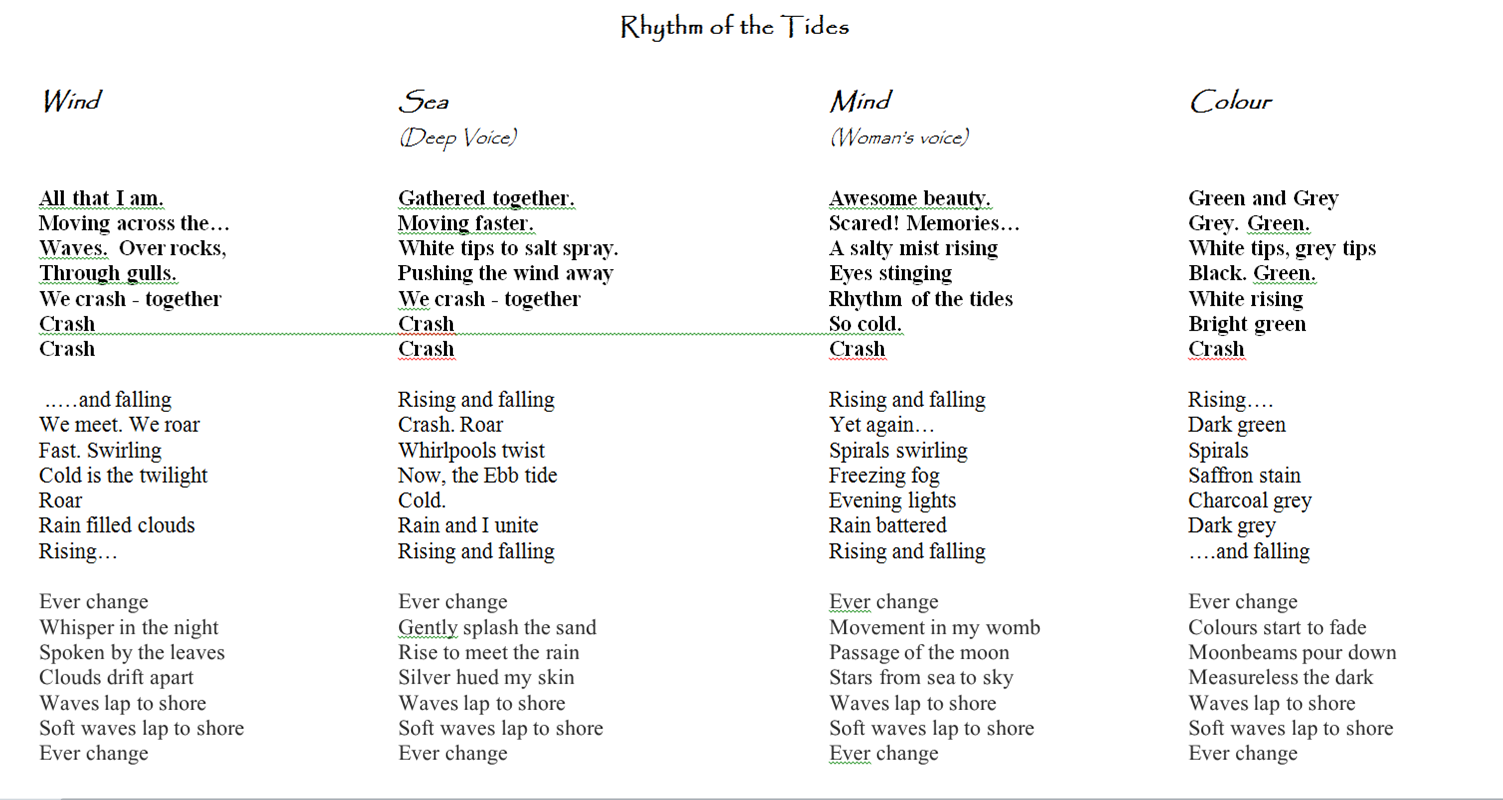